A Midsummer Night’s Dream and Macbeth in Rotating Repertory 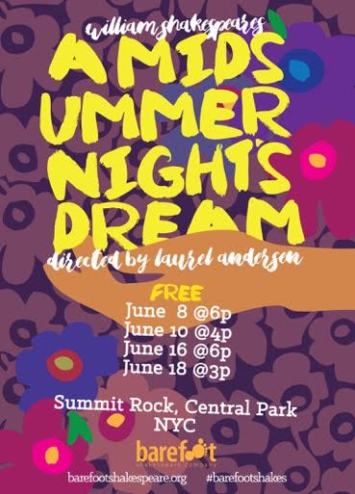 This season, Barefoot Shakespeare Company celebrates the 50th anniversary of the Summer of Love. Both A Midsummer Night’s Dream and Macbeth take place in 1967 and are set in San Francisco and Vietnam respectively.

In A Midsummer Night’s Dream, one night’s journey through a primeval forest wreaks havoc with the hearts and minds of four young rebels, an avant-garde theatre troupe, and even a fairy or two. Always attempting to find the tragedy in comedy, director Laurel Andersen says, “Can reason be regained –or should it? Music and magic work in concert in this surreal take on one of Shakespeare’s most popular comedies.”

Macbeth reeks of death, decay, and destruction, all caused by knee-jerk reactions to fear in the conquest for power. Director Matt Bayer feels that Macbeth has many parallels to the Vietnam War and using South Vietnam as our setting is an unsettling–albeit appropriate–fit. “The echoing horror of that war will cross the memory of the first time you read Macbeth and learned: “you’ll not find ‘a devil more damned in evils to top Macbeth'”.

Founding member and Artistic Director Rob Sniffin encourages audiences to attend both shows: “The shows this season are meant to complement each other. Not only are they taking place during the same time period, but there are similar thematic elements that run through both.” It’s an ambitious project for a small non-profit theater company but Sniffin says that the Company is ready to take on the challenge. “Companies our size aren’t performing repertory theater in New York right now. We’re excited to challenge ourselves and our actors to bring something new to our audience.”

Barefoot Shakespeare Company was formed in 2012 by Emily Gallagher, Courtney Moors, and Rob Sniffin. Barefoot’s mission is to bring Shakespeare’s work to a wide and diverse audience with a pedestrian, engaging and modern outlook on the works of the Bard. They strive to create work that is grounded, accessible and applicable and seek to approach all of Shakespeare’s texts with energy, enthusiasm and excitement. Located in New York City, Barefoot Shakespeare Company takes full advantage of the beauty of Manhattan’s Central Park to bring Shakespeare alive against a backdrop of a specifically American time and place.

Egeon says donate to our GoFundMe (link in bio) to

"My only love sprung from my only hate! Too early

Hello!! Our #fearless and #fierce President and Ar

This is a very ambitious year and as always, we strive to pay all of our artists equitably and to honor their work with compensation they truly deserve. With that in mind, our budget for this show is about twice what our budgets used to be, so we need your help. Please help us in offering our artists fair compensation for the amazing, hard work they put in each year to create free theatre. ... See MoreSee Less